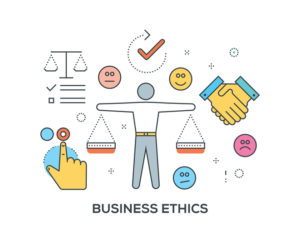 A growing list of businesses are eager to promote a strong culture of ethical corporate compliance, and lawyers should be ready to get on board by developing knowledge and skills to address this need.

I recently participated as the Ethicist in Residence  for Xavier University’s International Business Ethics Program.  In addition to being a guest panelist regarding international trade compliance issues at the University Cergy-Pontoise’s School of Law in France,  I traveled in London and Paris to learn more about how corporate giants like L’Oreal and BP tackle compliance and ethics on a daily basis.

My trip was eye-opening.  I visited the London-based Institute of Business Ethics,  had dinner with Michael Woodford, the former CEO/President of Olympus (and whistleblower exposing corruption at the company in 2011).  I also spoke with Robert Bond, a legal expert on data privacy in the UK.

Bottom line from all of these events?  Ethics and compliance are increasingly important to today’s businesses, as evidenced by the growing number of programs and resources that companies are putting in place.  As a result, lawyers need to be prepared to weigh not only compliance concerns but also ethical considerations in doing business.

First, companies are focusing more on compliance and ethics because of increasing legislation and pressures.  France recently enacted the Sapin II Law, which aligns French anticorruption law with aspects of U.S. and UK corruption enforcement.  Sapin II was prompted by  concerns of political leaders who believed that increased trade globalization was contributing to corruption and undermining economic interests.

The Organization for Economic Co-operation and Development has criticized France in the past for lagging behind other countries in its corruption enforcement efforts.  Unlike the U.S., France has never convicted a company for bribing foreign officials, despite the fact that those same companies often found themselves subject to investigation or prosecution abroad for such conduct.  Now, French companies are looking to U.S. companies and legal counsel for tips on how to comply with the new law.

Globalization shines a light on ethics

Second, companies are increasing resources for compliance and ethics due to expanding multi-jurisdictional cooperation on a global basis to enforce anti-corruption efforts and hold wrong-doers accountable.  Examples include Operation Car Wash in Brazil, as well as the VimpelCom enforcement action, which coordinated efforts among the United States, Sweden, Switzerland, Norway, the British Virgin Islands, Caymans, Bermuda, Ireland, Estonia, Spain, Latvia, the United Arab Emirates and others.  Thus, not only are companies faced with more legislation, there is also increased international cooperation to coordinate investigations and to detect wrongdoing across national boundaries.

Third, companies see value in increasing their compliance and ethics programs to attract and retain talent.  During a briefing to the Xavier University International Business Ethics Program participants, BP expressed that by refusing to bow to  cultural pressures of corruption, the company has been able to attract employees who would prefer to work for a fair and ethical organization.

L’Oreal representatives also commented that they are able to retain talent through efforts such as their Ethics Day, Ethics Café, and other ethics-focused programs throughout the year.  L’Oreal was recently named 2017’s Most Ethical Company by the Ethisphere Institute, winning the annual honor for the eighth time.  Unlike companies that lump compliance and ethics together, L’Oreal created a separate Ethics Department.  It was one of the first companies to appoint a Chief Ethics Officer, in 2007.

It is important for lawyers to understand that compliance is not just obeying this or that specific regulation.  Helping clients to create  a Code of Conduct or overall compliance program requires more than knowledge of certain regulations.  Further, ethical considerations must be built-in.  Just because something is legal does not make it ethical (and vice versa).  It is becoming vital for lawyers – both law departments and outside counsel — to understand not only the law, but also the ethical considerations involved.

Whatever an organization’s goals in creating a culture of ethical responsibility, lawyers must be able to respond, based on our own responsibilities under the Rules of Professional Conduct and with our  clients’ business perspectives in mind.